Yesterday's assignment in 31 Days to a Better Blog was to run a first-time reader audit. We were to watch a new reader navigate through our blog, noting how they moved through posts, what they clicked on, etc. Then we were to ask a few questions on the experience. 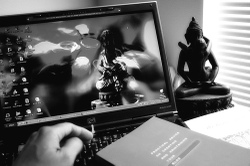 Results of My First Time Reader Audit
Last night I asked my husband, Darvin, to be my first-time reader. Yes, that's right--he hasn't really read my blog before. And before you start thinking that I selected someone who was going to let me down easy, let me just explain that my husband has no problem being blunt. I definitely got an honest assessment of the blog.

Watching him move through The Bamboo Project was fascinating. He reads a blog very differently than I do. I won't bore you with all the details--let me just share some key information that I thought was interesting.

Darvin's overall assessment of the blog was that it was "clean" and easy to navigate. That's good. He also said that he wants a different photo of me on the site because apparently the one I have up is not one he considers flattering. I won't share exactly what he said. Anyway--maybe I'll run a photo contest and have you guys vote on which one I should use.

A Bubble Blog?
Darvin had one more suggestion that I thought was really interesting. He wants what he called a "bubble blog." 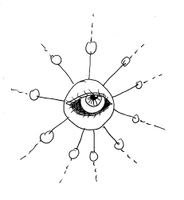 As he described it, I realized that he wants to navigate through a blog like it's a mind map. Each blog post would be a bubble and when we pulled up the blog we'd see all of these posts with all of these visual connectors to other posts. When you hovered your mouse over a bubble, you would see a list of key words or links and if it interested you, then you'd click into the post to read it.

This is an intriguing idea, in part because he's describing visualizing a blog as a web of interrelated ideas, rather than as a chronology. I explained that the use of tags would start to move in the direction of him being able to explore ideas, but the visual method was more appealing to him--tagging still felt too "linear."

I have no idea whether or not such a thing would be feasible. It seems like it might get really complicated really quickly. But it showed me how conventions I take for granted are seen differently by people who aren't in it every day. And it's also a really cool idea.

Update on the 31 Day Challenge
As you can see from the growing list in the right sidebar, a few other people have signed on to the blogging challenge--Christine Martell of VisualsSpeak and Liz, Amber and Jennie from SmokeFree Wisconsin. I'm glad to have some organizational blogs on board. It will be interesting to compare their experiences to individual blogs. I also have a few more people who have emailed me to say that they're considering participating, so I'll add them if and when they decide.

If you think you want to join, drop me a line. I can tell you that in the past few days I've learned a lot and I'm already seeing an increase in traffic and conversation/community.

Hi Michele, you've had some really useful responses there, and brave using your other half as your 'trialler'. My husband would have just said it was fine, rather than anything constructive to help!
I've blogged my audit too!

Just took a look at your post, Laura and you had a LOT of good stuff going on. I left you a comment. As for my husband, one thing I don't have to worry about with him is him saying "that's nice." The man can talk and he doesn't mind doing it. In great detail.

Michele - just alerted to your blog by a post in a community of practice on www.idea.gov.uk. Some really stimulating posts - thanks!

Your husband's idea of a mind map of your blog is an interesting one. Have you ever seen www.kartoo.com? It describes itself as a "metasearch engine with visual display interfaces" and produces a mind map-like diagram of search results. I don't know if there's some way it could produce a mind map of what's within your blog. I suspect not but it is at least an interesting web-based application of the mind map idea.