Egocentric vs. Object Centric Networks: I Think I Know the Problem With Ning 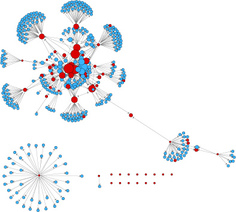 Three months ago we started the Building a Better Blog Ning network. After three weeks I was still enamored with the community. Things were going well, we had a lot of new members. All was right with our little corner of the digital world.

Then we hit a wall, which I blogged about a few weeks ago. Site activity was way down and we began struggling with ways to continue to maintain the community and attract new members. We're still working on that, but now I think I see more clearly why we've hit the wall, so to speak. It's because we're an egocentric network, not an object centric network.

Egocentric and Object Centric Networks
This was actually a new one to me, that I stumbled across while reading this article from Fred Stutzman. In it he explains that egocentric networks are places like Facebook, MySpace and LinkedIn. They develop around the profiles of the people who join them. Object centric networks, on the other hand, develop around interactions over digital artifacts--like Flickr, which has formed communities around photo-sharing and del.icio.us, which focuses on sharing links.

Fred has a lot wrapped up in here. First, the cleavage on the lines of ego vs. object. Social networking sites are ego-centric. Object-centric social sites, like Flickr, YouTube, Del.icio.us, place something else at the nodes of the network (admittedly, though, Flickr is a tough one). I have previously called this the primary pivot. The way to ascertain what type of network you’re looking at is to look at what gets the URLs…what is the primary thing being shown at the URL? In ego-centric sites it’s a profile. In object-centric sites it’s the object…

Fred also suggests, and this is one of the best ways I’ve heard this described, that this is why migration away from ego-centric sites is easier than object-centric sites. It’s because we’re not storing anything other than our identity, which we feel like we take with us when we move to a new site, right? (even though all of the info we’ve submitted to the site is lost!) But we never feel like we’re taking our photos with us when we leave…they are obviously objects we possess.

Josh concludes that our ability to handle egocentric networks is finite--we can handle only so many people in our lives. But our ability to manage object centered networks is infinite, especially when it's so easy to share digital pieces of information.

So basically what we're saying here is that when people are interacting about an object (like a photo or a video), they tend to visit and revisit the site to add more of these objects and find new ones. In an egocentric site, though, once you've put up your identity, then what do you do?  Eventually you will probably get tired and move on (unless you're someone who has endless amounts of online time, like teens who are happy to spend hours on Facebook).

In thinking about our Ning network, I think that the fact that we formed the network around a common interest puts us in a funny in-between position between an object-centered network and an egocentric network. The common interest of better blogging is to some extent like an "object" for us--it pulls us together around a central theme more than might happen in a more general network. But at the same time, our profiles are a much bigger part of the community interaction than we might find in a place like Flickr. And there isn't the reason to go there to add objects that you have with a YouTube kind of network.

Another aspect of this "egocentricity" at Ning is that you have to have a network creator. In this case it was me and what I've found is that most people feel like I "own" the community somehow. Part of that is because I have the network controls, so that means I'm the one with the capability to make the most changes to the site and to send broadcast messages. But part of it is because every time you visit, there are signs everywhere that say "this network created by Michele Martin." Kind of hard to feel like the place belongs to the community when you see that plastered everywhere. And I know that I even add to this--when I first wrote this post, the first sentence started "Three months ago I started.  . " not "we started"!

I'm not sure that this takes me any closer to answers about what to do, but it does explain a lot about why we're facing the challenges that we are. What thoughts on this do you have? Does it ring true?

I was just over at Beth's Blog and noticed you left a comment about Harry's presentation. Last night, I wanted to thank you for your blog which is a constant source of information and inspiration. But I felt as if I needed to also respond with something on topic to one of your posts and couldn't come up with anything else to say. Thank you for your hard work and creativity you share in this blog.

Flickr is just great. Something I've noticed is the comments are almost always nice there and not so nice at YouTube. I think consistent positive reenforcement is awfully important, but the lack of it doesn't seem to discourage people from making videos and putting them up at YouTube.

Most of my efforts to get people to collaboratively create content, say for example ideas and lessons to encourage deeper connections with the natural environment, have tended not to get off the ground. I think part of that is the need for ego stroking, communication and feedback. There's a need for people's work to be appreciated.

So somewhere there's a happy middle between ego-centric and object-centric networks.

I was a participant at Omidyar.net which closed in September. One of the places me and others migrated to is Razoo.com. Razoo is a "face" model. So part of the challenge is to get object-oriented, to come together around tasks.

It's hard to do, but I don't think the problems is simply a matter of Razoo as a platform. I think part of the problem is the learning curve for creating online content. You've hit on something important about your Ning network as being "in between." This is a good spot to be. Now that you know each other, it's time to create. But some of the members need help and encouragement as to how to create.

One way to proceed is to identify those in the network with skills for creating online and to match them up with others who can create with a bit of knowledge and reenforcement.

I've not been particularly successful in my efforts to do something like this, but I still think it's the way forward.

Hi Michele. I think most of the Object Vs Ego centric comparisons are true. One aspect that may have been missed out, however, is the function centric network. Where a network forms in order to perform a function or achieve a goal. In this case, it doesn't quite fit into either pigeon hole. When you leave, you can take your personality away but everything you've put into the network, all the work you've done trying to perform the function or achieve the goal may be lost. I say may be list purely because the goal the network is trying to achieve may be public, personal or shared.

I mention this for two reasons. I think at the moment the better blogging community is a function centric community but the goals we are trying to acheive are very much public, i.e. our individual blogs. If we could set some shared goals, it may get people a bit more involved. Secondly, I've used similar analogies when dealing with clients, although in a slightly different context. And as a BA (http://en.wikipedia.org/wiki/Business_analyst) I'm used to defining things like this to the nth degree.

Very good write up by the way.

Thanks John and Simon--you're both bringing up excellent points. John, your point about the difficulties of using the technology is well-taken and to some extent, I know that this has been an issue at BBB, especially with newer users. We tried to address some of it when Sue Waters did a "New to Ning?" series for her Ning community, but there are always issues around people's comfort levels in playing with the tech. I find Ning pretty easy, but not everyone does. I like your idea of pairing people so that someone with more tech knowledge can help someone with less, which then feeds into Simon's point about having a function-centric network.

The initial BBB community formed to accomplish common goals in an individual way--to work together on shared tasks to make our individual blogs better, which gets at what you were saying Simon. We tried to continue that with the Weekly Challenges, but for some reason, they never took off in the same way, although I'm not sure why.

I think you're right that shared goals are the answer, although I'm not totally sure what they'd be or how we'd get there. That's obviously something we need to talk about.

Of Course! That is what has been bothering me this whole time but I could never put my finger on it. I, too, created a NING site for those interested in Social Learning: SocialLearning.ning.com. But after I did and I started getting people there... what now? How do I get them to want to come back. The first thought was conversation. But that is not something you can force. And if it doesn't happen, people lose interest and move out.

But if it is centered around objects, especially ones that each individual has some ownership in, then there is some sticking power. So, the question is, how do you combine the strengths of both type of networks to strengthen networks like your Bamboo and my Social Learning networks? I can how it is combined in a corporate setting. But what about more of an informal network setting?

I need to think about this some more...

I first learned about the difference from a user interface design standpoint from Rashmi's slide show
http://www.slideshare.net/rashmi/perils-of-popularity-webdirections-keynote/

Anyway, have you started to explore all the online facilitation/community literature techniques and how they apply to white label social networks?

Great post! And thanks for your comments about Harry's powerpoint. Tonight he decided to replicate some handrawn comics he had created in powerpoint. While he writing in the speech bubbles, he called me over to show me something he discovered - the spell check! Then I got a series of questions how come it doesn't suggest the correct word? Look what happens when I mispell the word this way instead of that way ... why is that?

Now, the space of less than a week - he knows more about powerpoint inner working than I do and I've been studying it for years ...

had the same kind of question popping up in another ning-group:
http://internettime.ning.com/forum/topic/show?id=656824%3ATopic%3A9751

Jay Cross also felt as though the community saw him as the creator and thus the one that could make things move. your remark on 'this was created by...' is very true, it would make a difference to get away from the ego and onto the community spirit.